The hallmarks of the Christmas season are upon us: music, tinsel, and mistletoe – plus a steady stream of events and expenses. And while the hustle and bustle of Christmas is hardly new, this season promises to be especially active, with over $700 billion in expected retail spending. Additionally, holiday trips are growing ever more popular, with end-of-year travel increasing for the last nine years in a row. Throw in billions more spent on food and beverages, and the scale of the Christmas-industrial complex becomes staggering.

For this project, we sought to explore some of the industries and spending activities that define the Christmas season in both the U.S. and the U.K. Combining an original survey of 2,300 individuals with information from an array of other sources, our findings present compelling insights into consumers’ holiday behaviors. From buying Christmas trees online to travel and gifting tendencies, our research explores the most intriguing subjects of the season. To learn more about the hard data behind Christmas, keep reading.

Before they reach Americans’ living rooms, where do Christmas trees grow? In 2017, 6,446,506 began their lives in Oregon – the greatest tree production total of any single state. In 2018, a special Sweet Home fir journeyed east from Oregon to serve as the U.S. Capitol Christmas tree. The White House, conversely, picked a specimen raised in another tree production powerhouse, North Carolina. Michigan and Pennsylvania also had robust Christmas tree industries, yielding over a million trees apiece in 2017.

One reason Oregon surpasses other states in Christmas tree production is obvious: It devotes more land to the enterprise. Indeed, some farming operations in the state are massive, with millions of trees in various stages of growth at any given time. Michigan also devoted over 140,000 acres to Christmas tree farming in 2017, and Pennsylvania, North Carolina, and Wisconsin each had over 100,000 acres dedicated to the crop. While these acreage totals may seem massive, experts note that many farms in these states have actually downsized in recent years. As demand declined during the Great Recession, many farms scaled back their planting operations – leading to a Christmas tree shortage today.

Oregon also led all other states in growing efficiency, but others made the most of their relatively limited acreage. Hawaii, where agricultural programs have sought to encourage a fledgling Christmas tree industry, ranked second with 102 trees per acre on average. Tennessee growers were similarly efficient: The state ranked fifth overall in trees per acre. Conversely, some big producers distributed their trees more sparsely across available land: Michigan averaged just 41 trees per acre despite ranking third in total production in 2017.

The Christmas tree industry has a problem on its hands: Since 2010, sales of artificial trees have grown steadily, while true tree sales have been largely flat. And while fake firs have historically cost more than the real thing, they can be re-used on an annual basis – leading some experts to say they may actually be better for the environment in the long run. Indeed, in terms of actual dollar revenues, artificial Christmas trees yielded more money in sales than real ones in 2017. The only other time this occurred was in 2013 when real and artificial options generated similar sales figures. 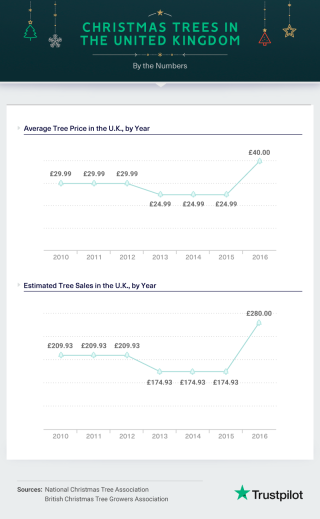 Turning to Christmas tree figures from the United Kingdom, we saw a slight dip in sales and price from 2012 to 2013. In 2016, however, a massive spike in prices and sales occurred. One explanation for this trend could be the Brexit fallout: After 2016’s vote to leave the European Union, the pound plunged. As a result, the cost of Christmas trees imported from Europe spiked, and the demand for homegrown trees increased. That doesn’t mean imports have vanished entirely, however. The British bought £3 million worth of foreign-grown trees in 2017, many of them passed off as domestic products. 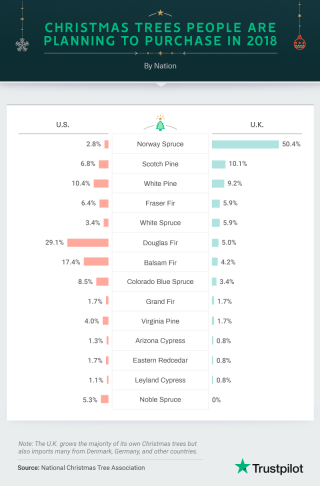 For Christmas tree connoisseurs, not all evergreens are created equal. In the U.K., the overwhelming species of choice was the bushy Norway spruce, a British Christmas staple since the Victorian era. Americans seemed to prefer the Douglas fir, which can near 300 feet tall in some instances, and the balsam fir above all others. Still, a sizeable contingent of U.S. respondents preferred the soft needles of the white pine as well. The distinctive features of each species may be changing somewhat in the coming years, however: Genetic engineers are crossbreeding species to produce desirable traits, such as strong needle retention to keep flecks of green off the floor.

For many, the process of selecting a tree is an essential Christmas tradition. Yet, Amazon made a splash when it announced it would ship Christmas trees directly to customers’ doorsteps in 2018, eliminating the hassle of strapping one to the roof of your car. Among our U.S. respondents, nearly 70 percent said they’d seriously consider this online tree shopping option. U.K. residents, however, were somewhat more skeptical.

U.S. respondents were particularly willing to trust Amazon to deliver their trees, with nearly 9 in 10 saying they’d consider buying one from the mega-retailer. U.K. residents were most likely to entrust Tesco with this mission, despite the brand’s recent reputational issues. In some cases, our data revealed substantial differences in brand perception on either side of the Atlantic Ocean: While 72 percent of Americans would consider buying a tree from Walmart online, just 13 percent of U.K. residents would do the same.

Among respondents in the U.S. and the U.K., convenience was the top reason for considering the digital purchase of a Christmas tree. A possible price advantage was also a leading factor, especially for those in the U.K. Conversely, those who resisted buying online often cited reasons related to the Christmas spirit, such as a sense of holiday tradition associated with buying a tree in person. Logistical concerns were also common, with 55 percent of Americans and 38 percent of British individuals fearing their trees might get damaged during the delivery process. Amazon has said its trees will arrive in a typical cardboard box, but they won’t be noticeably damaged in transit. 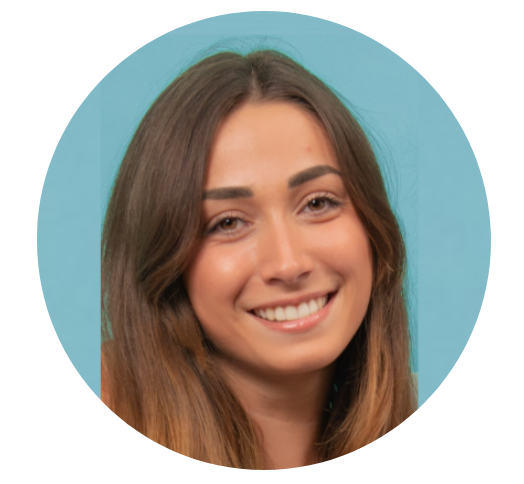 Flora Frichou
Senior Content Strategist
When she's not writing, Flora likes to think of herself as a professional online shopper. She loves a bargain and could spend hours comparing and researching products online. That's one of the reasons why Flora believes in Trustpilot's mission to make the world a better place, one review at a time. If you would like to learn more about Flora, you can find her on LinkedIn, or read more from her on the blog.

Announcing Trustpilot’s first research report, the Consumer Behavior and Expectations: The 2017 Holiday Shopping Report. This report analyzes over 1 million global reviews and 13,000 consumer responses to help retailers understand and exceed consumer expectations this upcoming holiday season (November and December). By looking at past consumer activity from the 2015 and 2016 holiday season, we’re able to explore how consumers feel during this active shopping season and help retailers react and adapt to this behavior.

The comprehensive guide on how to build a customer feedback strategy

Your company is smart. It studies its playbook and goes over past marketing plays to be prepared for its upcoming moves. It knows that brand reputation based on customer feedback is a critical step in growing as a healthy company.

Better decisions are made for the sake of your company not only through open discussions and internal feedback, but through the feedback from surveys you send out.

Your customers aren’t ashamed to tell you just how well or poorly their interaction with you went, and by leveraging the feedback from them, you gain valuable insights that will shape your current efforts at acquisition and retention, as well as shaping the way you prospect and build your sales.

Bad reviews: why people write them, and what they expect

If you’ve ever ordered your morning coffee and felt uninspired by the request to participate in an online survey or leave a social review regarding your experience, you probably didn’t have a particularly noteworthy experience. If you’re willing to take time out of your day to leave online feedback, it’s usually because you want to warn people about a bad encounter, or to help them make a better buying decision.

In a world of viral marketing and social influence, online reviews have the power to make or break small businesses, but they aren’t the only companies paying attention. Reviews have become such a pivotal part of the buying experience for so many customers, that even tech goliaths like Apple can’t help but play an active role in responding to more critical responses.

So what compels us to leave reviews online, and what are we really hoping to achieve by contributing to the public discussion of a brand, experience, or product? To find out, we surveyed over 1,000 European and North-American consumers about why they leave bad reviews, how good experiences inspire them to give feedback, and the kinds of reactions and rewards they sometimes expect to receive as a result of their critiques.

Think the online review phenomena might sometimes have ulterior motives? Read on to see what we uncovered.